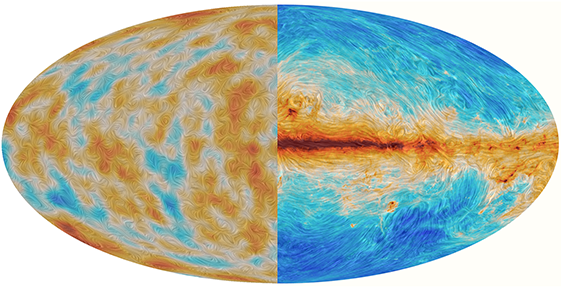 The prodigious development of observational means and the growth of computing capacities open up a rich field of research in which microscopic physics, the multi-scale physics of turbulence, cosmology and data science come together. The scientific questions tackled by the team fall within this multidisciplinary framework.

– Cosmology and the Universe: Speculation about the origin of the Universe dates back to ancient times; each ancient civilization had its own version of how the universe was created. But it is only recently that observations have been able to probe the large-scale structure of the universe. Modern cosmology started with Hubble’s discovery that we live in an expanding universe full of galaxies and blossomed after the discovery of the cosmic microwave background radiation (CMB) in the 60s. This led to the `hot-big-bang’ model that linked astronomy and particle physics, which explained observed abundances of the light elements. The forging of ideas from particle physics and cosmology continued with Guth’s 1979 proposal that so-called `grand-unification’ (of the strong and the electroweak force) at a much earlier epoch might have led to a phase of `inflation’, which could explain various puzzles (the so-called `horizon’ and `flatness’ problems).  Inflation not only purports to explain the origin of all the matter in the universe but also predicts the `seeds’ for the structure that astronomers observe in the present day in the distribution of galaxies and in the anisotropy of the CMB. The last development in the development of our understanding of the universe was observations, at the turn of the century, that the geometry of the universe is spatially flat and is undergoing `late-time inflation’ requiring `dark energy’ in addition the equally mysterious `dark matter’.

– Data science x Astro: The resolution of these issues implies important methodological developments combining numerical simulations, modelling of physical processes and statistical data analysis, together with a strong involvement in the preparation and exploitation of large observatories within worldwide collaborations.

The challenge raised by the intertwining of astrophysics and cosmology is at the heart of the team’s research since the non-linear physics of matter in space affects both the observation of cosmological signatures and cosmic evolution.

The personal webpages of the members of the team can be accessed on the directory.