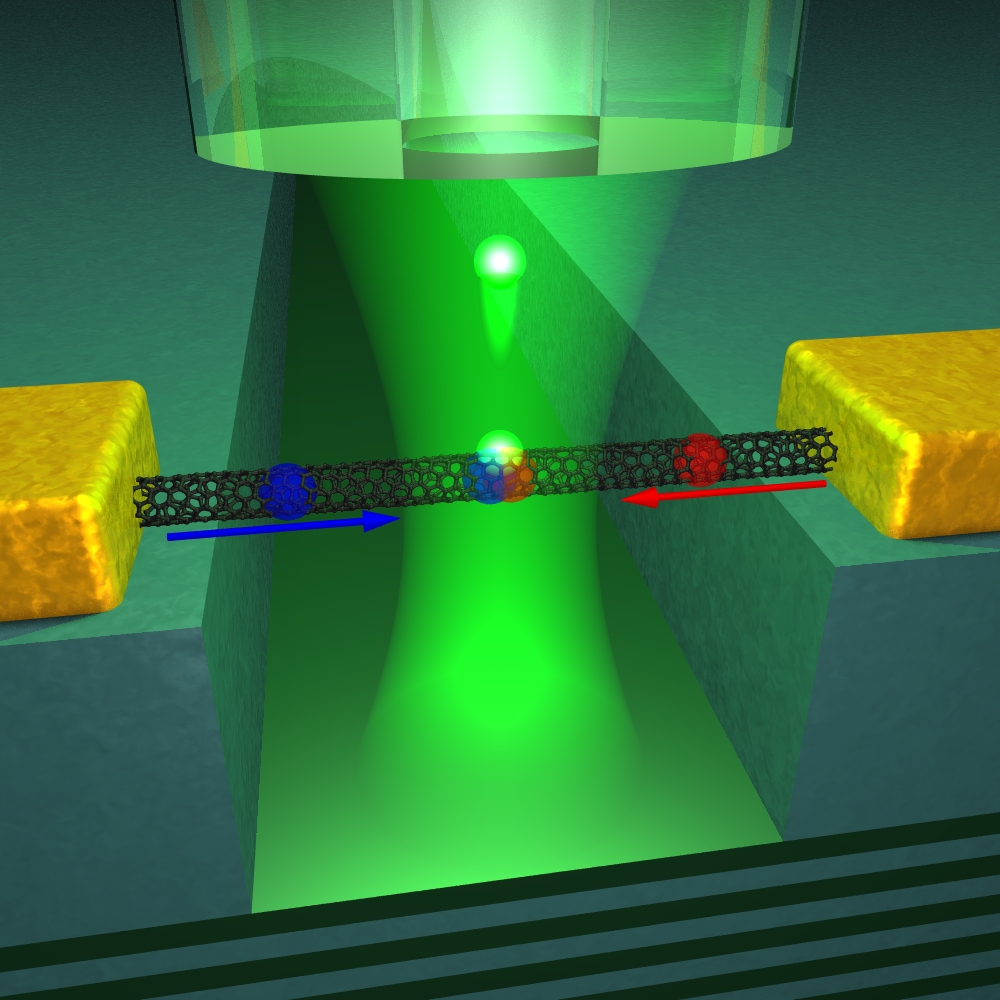 Carbon nanotubes are original emitters with many advantages for future quantum telecommunications. Their adjustable gap through the radius of the nanotube, with the possibility of working easily at wavelengths of 1.5 μm suitable for transporting information by optical fiber, the ability to contact them electrically and their good optical behavior at room temperature are qualities that are quite unique in the world of nano-emitters competing for future quantum sources.

In addition, their uni-dimensional character and their original coupling to the phonons offer original resources to observe new effects in light-matter interaction and to create new functionalities for quantum-light sources.

In collaboration with the Atom Chip of the LKB team, we have developed a fully tunable fiber-based optical cavity technology, perfectly suited to nanotubes that show a high spectral dispersion. This device made it possible to obtain the first results on the emission of single photons by a nanotube in the Purcell regime, where the emission is exalted by more than one order of magnitude in the cavity mode, allowing an excellent directionality, an extraction efficiency close to 100% and a very good fidelity.

Tomorrow’s secure telecommunications, based on quantum cryptography protocols, require the use of individual photons, ie one by one. Each photon carries elementary information (one bit) encoded, for example, on its polarization state. Reading the information involves destroying the photon and therefore any eavesdrop attempt is virtually impossible. There are various telecommunication protocols based on this principle and all require unique photon sources on demand, reliable, bright …

Several emitters are envisaged for these applications (semiconductor quantum dots, colored centers of nano-diamonds, etc.). Among these candidates, carbon nanotubes have valuable assets: their capacity to operate at room temperature, their emission at wavelengths compatible with long distance telecommunications in optical fibers as well as their ability to be electrically stimulated. However, in order to fully benefit from these properties, it is necessary to extract the emitted photons in a given direction (an electromagnetic mode) and to increase the brightness of the source.An effective method for this is to couple the nano-emitter to a micro-cavity in order to benefit from a quantum electrodynamical effect called the Purcell effect: when the size of the optical cavity becomes comparable to the wavelength and when its quality factor (its ability to filter light at a particular frequency) is high, then the (spontaneous) light emission properties of the nanotube are strongly modified with -as observed in the present study- 90% photon redirection in a single mode and an increase in brightness by nearly a factor of 30.The difficulty is to “construct” a small optical cavity exactly at the location of the nanotube while ensuring that its working frequency corresponds to that of the nanotube.

This is what the Pierre Aigrain laboratory team did for the first time, working in collaboration with a team from the Kastler Brossel Laboratory (both from the ENS Physics Department) by adapting a reconfigurable cavity technique based on optical fibers initially developed for research on cold atoms.

In the video below the working frequency of the cavity changes (thanks to a nanoscale displacement of an optical fiber) and a tenfold increase in the brightness of the nanotube is observed when this frequency meets that of the nanotube.

It is still necessary to ensure that the photons antibunched (ie the probability that the nanotube emits two or more photons at the same time is quasi-zero.) This is what is measured in an intensity correlation experiment (Hanbury-Brown and Twiss) presented in the animation below: a semi-transparent plate randomly redirects the photons to the right or left detector. Then the probability that a photon is detected on the left as a function of the time elapsed since the detection of a photon on the right is recorded by means of a fast acquisition board. The correlation curve shows a series of peaks because the stimulation of the nanotube is obtained by a series of optical pulses. The central peak height thus measures the probability that two photons are emitted simultaneously, and its absence in the data presented below proves that the nanotube source that we have fabricated has excellent fidelity.

Thanks to the flexibility of the fibered cavity geometry, we were able to take full advantage of the exciton-phonon coupling and obtain the emission of single photons of high spectral purity over a very substantial frequency range, more than 100 times greater than the spectral width of the source. This non-resonant emission is obtained using the so-called “cavity feeding” effect which is one of the signatures of quantum electrodynamics. Using picosecond photo-luminescence decay measurements we have estimated the value of the Purcell factor which can reach 70; Furthermore, by modeling this efficiency as a function of the cavity / emitter detuning, we have estimated a Rabi coupling of the order of 40µeV in this system.

The implementation of a superlocation technique makes it possible to obtain information about the sites of emission of light along the nanotube with a much better precision than the diffraction limit using a hyperspectral approach. It is observed that light emission is not at all uniform along the nanotube. On the contrary, it is localized on specific sites distant of about 80nm. Moreover, the emission wavelength varies slightly from one site to the next.

We simulated this behavior using a random potential model for the exciton along the nanotube. This potential results from inhomogeneous dielectric screening along the nanotube due to the roughness of the interface between the nanotube and the polymer matrix. A key prediction of this model is the disappearance of an excitation resonance common to all luminescence lines in favor of a series of discrete resonances related to the excited states of the local potential wells. This result is in very good agreement with the experimental observations. 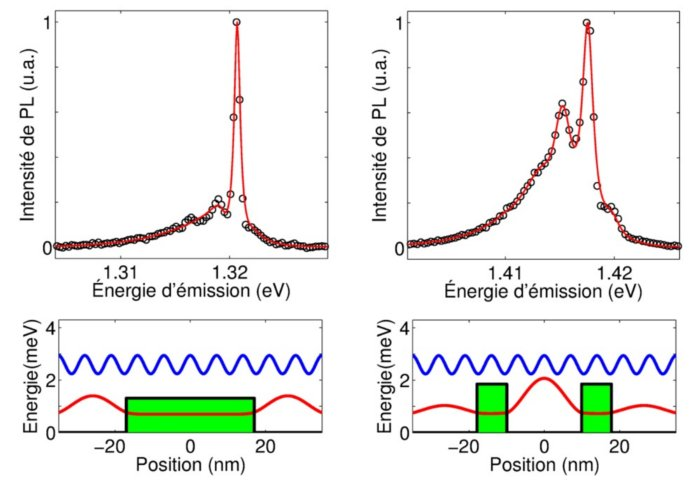 The crystaline structure of carbon nanotubes leads to a strong confinement of electrons in two directions of space whereas they are free to move along the nanotube axis. This marked one-dimensional character is the source of most of the feature physical properties of carbon nanotubes and in particular their optical properties. In fact, the spectrum of the light emitted by semi-conducting nanotubes is an efficient means to study the intimate interaction mechanisms between electrons and lattice vibrations. These interactions are especially enhanced in a one-dimensional system, leading to characteristic asymmetric luminescence line profiles at low temperature. In this study, the optics group of LPA has shown that the spectrum measured in some nanotubes significantly differs from this characteristic profile. This effect results from a profound modification of the low-energy vibration modes due to quantum confinement of vibrations et the nanometer scale as a result of the mechanical coupling to the environment. This work paves the way to low-energy phonon engineering in carbon nanotubes and to the design of high spectral purity nanotube based light sources, which is a highly desired feature in nano-photonics.