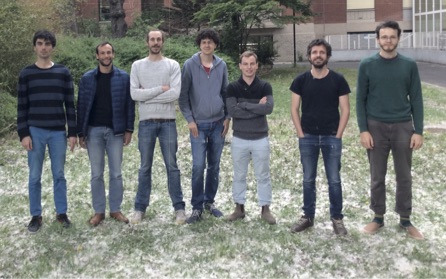 We are currently looking for a motivated post-doc ! Please apply : gabriel.hetet@ens.fr 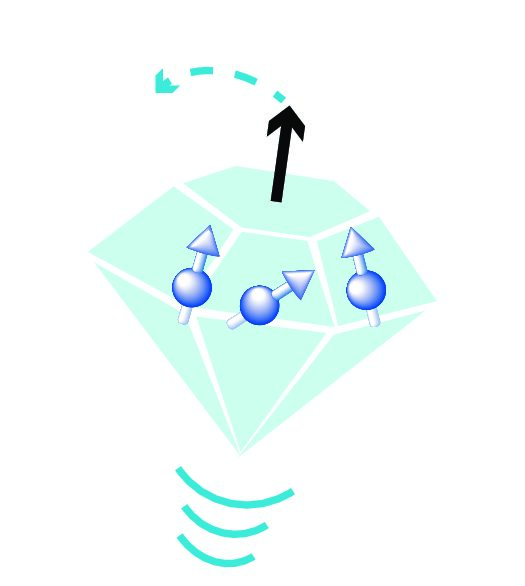 Our research group is studying the properties of diamond colored centers and their use in experiments involving the coupling of spins with mechanical modes of levitating objects.

The colored centers are point defects in the carbon matrix of diamond. The electronic levels of these defects are well within the band gap (a few electron-volts) of diamond, which gives NV centers a very high photo-stability.

In addition, the negatively charged state of the nitrogen-vacancy center, the NV- center (for Nitrogen-Vacancy center) has a purely magnetic spin triplet in the ground state that can be polarized and read-out optically at ambient conditions.

This property makes it possible to control “diamond magnetism” and, for example, to exert forces on levitating particles. 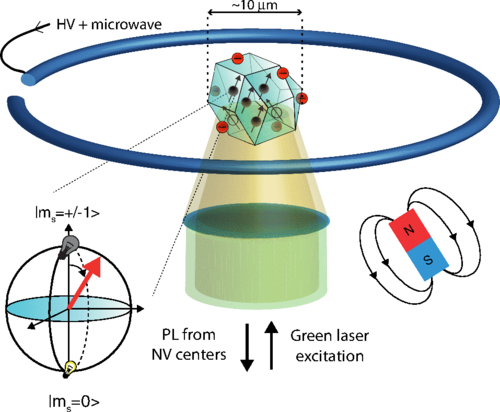 There are still fundamental questions about the complete description of how a physical system transitions from the quantum to the classical world –the decoherence-. A way to answer those questions could be to place macroscopic objects, such as mechanical oscillators, in a quantum superposition state. This ambitious objective requires, in the first place, to control extremely precisely the motion of a mechanical oscillator. Tremendous progress have been made in that way by using the mechanical forces that light can apply on massive objects. More recently, an alternative approach emerged, aiming to use the magnetism of electron spins. This idea came from the remarkable electrons properties found in some materials. For instance, the electrons localised on a specific default in diamond, the NV center, are isolated well enough so that we can efficiently control their spin state and thus their magnetism using a combination of laser and microwave fields. In principle, only one of those quantum magnets could influence the motion of a macroscopic object, bridging the quantum and classical worlds. However, the experimental implementation of such a process is a formidable challenge.

We manage to act on the motion of a mechanical oscillator, a diamond levitating in an electrostatic trap, using the spin of the few billions of NV centers contained in the diamond. We could further demonstrate that the spins can be used to cool down the motion of the diamond. The road toward fundamental tests of quantum physics is still very long, but those results are an important steps forward.

To obtain those results, a setup has been put in place during nearly 5 years at LPENS. It consists primarily in an electrostatic trap, a small metallic ring to which an alternative voltage is applied, allowing to levitate diamonds that are around 10 um in size. Once a diamond is trapped, the spin of around one billions of NV centers hosted in the diamond is maintained in a non-magnetic state by shining a green laser on the diamond. Then, applying a microwave field at a precise frequency allows to magnetize the spins. By doing so, NV centers act like tiny compasses and try to align with an external magnetic field generated by a fridge magnet placed next to the trap. This apply a torque on the diamond which changes its orientation. Optical detection of the diamond orientation allowed to observe this process, demonstrating the possibility to act on the diamond motion using the NV centers spin. Furthermore, it has been possible to exploit the spin magnetization dynamics coupled to the diamond orientation to create a viscous force allowing to cool down the angular motion of the diamond. Under a 1mbar pressure, at room temperature (300 K), a temperature of 80K has been observed.

Coherent manipulation of the nuclear spin of ensembles of NV centers 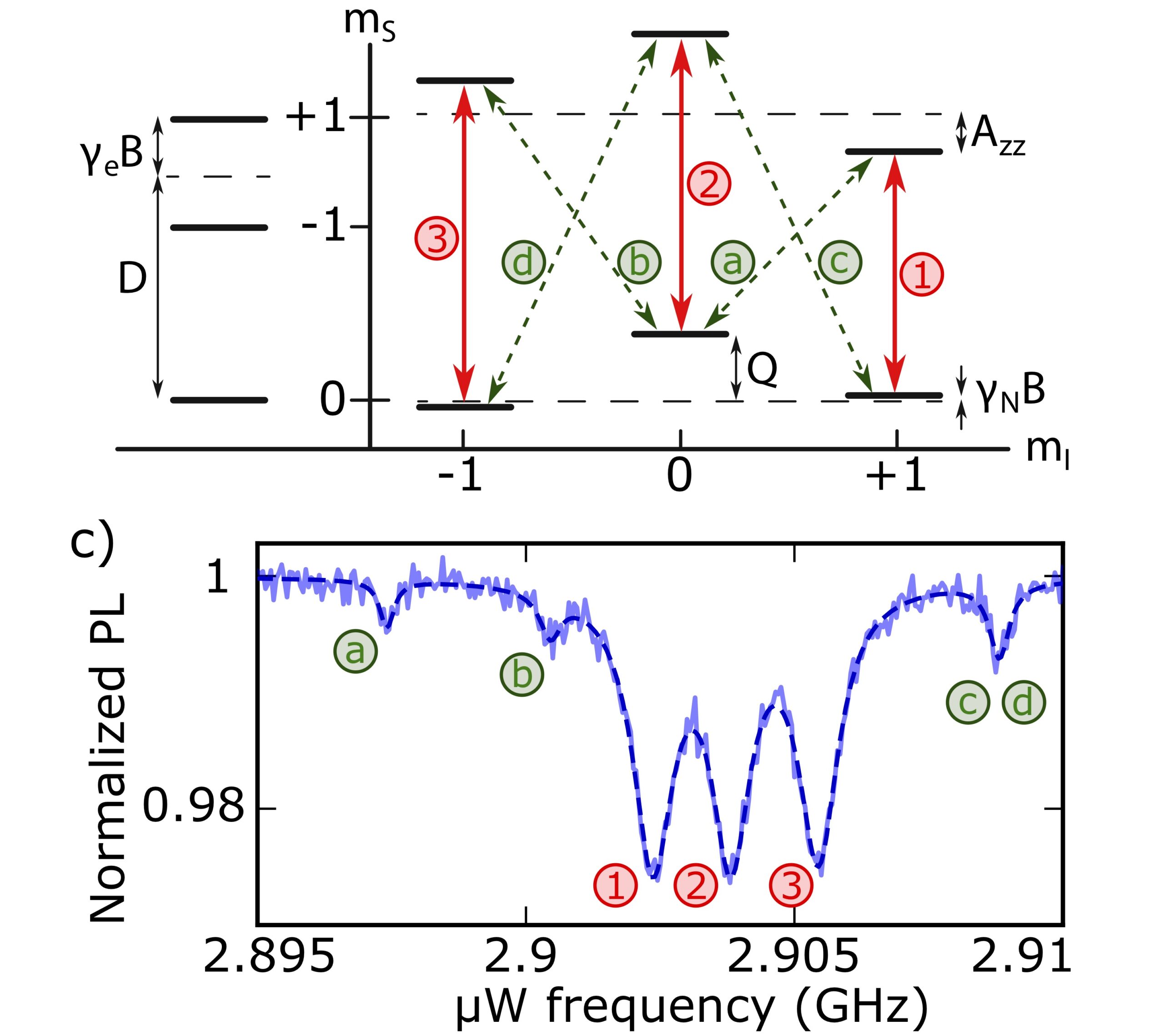 We have directly observed “forbidden” transitions by coupling the nitrogen nuclear spins of the NV center to the NV electronic spins via an off-axis magnetic field.

Using these transitions, we could observe coherent population trapping with ensembles of spins as well as polarisation of any nuclear spin state of more than 100 nitrogen atoms in the NV centers.

Narrow linewidth ensembles of SiV centers in a nanostructure 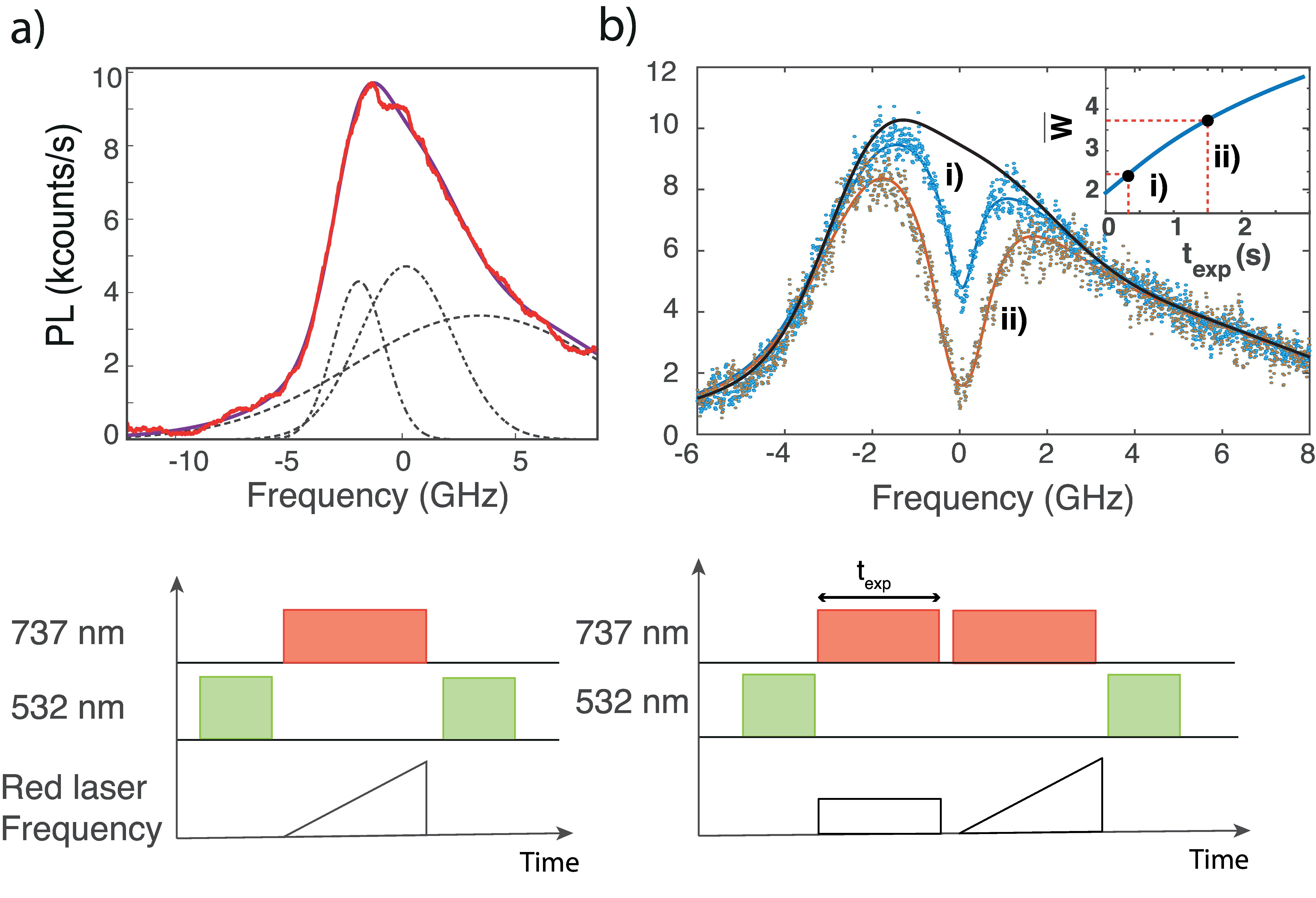 We have shown that it is possible to isolate an ensemble of emitters that are close to lifetime-limited in a diamond nanostructure.

To do this, we have used a diamond nano-pyramid and comtroled the charge state of SiV centers using resonant laser excitation.